Fit India Week was celebrated with all the enthusiasm and zest for Fitness.This initiative taken by CBSE has etched a history in the field of education.
All the various fitness related activities suggested like Yoga for all, Free hand exercises, Poster making competition, Debate competition, Essay writing competition , Guest lectures,Tug of war, Kho kho etc were organized with full vigour and vitality by the students.
It was a Fit Cambrdge Week under the aegis of CBSE.

We believe in overall development of the children . It is a proven fact that learning is enhanced through a number of CO-scholastic activities. School excursion is one of them , as it has the tendency to add reality to learning experiences which consequently enriches the courses of study. Keeping this in mind the school organised a day long in house camp ‘Rocksport’ which involved adventure activities.Other than this students also visited ‘Rangla Punjab’ and ‘Curo’ . Both the days were fun-filled and embedded the qualities of resourcefulness, self-confidence, observation etc among the students.

Super Market
With an objective to create and educate children about the importance and consumption of fruits and vegetables in regular diet, the Kindergartners of CISN organized Super Market in the school premises. A market was set up by Kindergarten students with the help of teachers. The students of Pre-Primary and Primary learnt about fruits & vegetables in a unique and healthy way.

"You don't need a heroin to be a hero". With this motto, C.I.S.N Organized ISA activity on 22nd November,2019 in which students of grade IX and X presented a street play in order to spread awareness among masses to say 'No to Drugs' and also wrote an Article mentioning the percentage of the youth suffering from this disease. In addition, grade IV and V made Slogans whereas grade VIII to X were enlighten on the various measures to combat the disease through a PPT by our school nurse Ms. Amandeep Kaur.

NCC students of Cambridge International School, Nakodar organized an anti drug rally at its surrounding to create awareness among the people about the ill effects of consuming drugs. Students marched through the village raising slogans “Say No To drugs”, “Drugs don’t take you to heights”, “Stay away from drugs and live happily” etc. Total 28 NCC students participated in the rally under the guidance of their incharge Ms. Gurinder Kaur.
The students went door to door informing the people about different types of drugs that lead to death. They also told them how one can avoid them. The people were informed about the bad effects of drugs on life and health. They were also made aware the efforts of the government to control drugs.

Children's Day
Children's Day is celebrated to pay tribute to the great personality, Chacha Nehru. This day was celebrated with great enthusiasm and fervour at CIS Nakodar on 14th November. The teachers enacted a story for the students in order to express their love and care for them. They sang and danced to make the day memorable. The students were overwhelmed and cheered for them. There was a giggle in the face of every child. To highlight the importance of this day teachers gave the message of peace and harmony and urged the children to follow the ideals of Pandit Nehru. There was excitement in the air and the children were full of stories about their special day at school.

"Leadership is not about you, it's about investing in the growth of others. If your actions inspire others to dream more, learn more and become more, you are a leader." We take great pride in announcing that our worthy Principal Mrs. Sandhya Dewan (Cambridge International School, Nakodar) was honoured with the nost coveted award of Excellence in School Education-CBSE for her profound knowledge and hard work as the Principal of Institution by Venus International Foundation - The Centre for Leadership Development. It is indeed a moment of glory and another feather added to the school.

Dussehra
India is known as a land of festivals & celebrations, Dussehra is one of the popular festival which has been unique in its perception and significance. Dussehra festival signifies victory of goodness over evil, light over darkness and happiness over gloom. Keeping the festival spirit alive Dussehra was celebrated on 7th October 2019 (Monday) . The glimpses of Lord Rama's life were depicted through different scenes. The little confident performers were adorned in attractive outfits of Lord Rama, Sitas, Ravana etc.
The celebration started with the narration of legendary story of Lord Rama's victory over Ravana and to reinforce the message that good always triumphs over evil. The day was filled with great joy and enthusiasm.

The greatness of a nation is reflected from its leaders.Today the school celebrated Gandhi Jayanti to highlight how important non violence is in achieving the objectives. Different activities like stage play and speech was given by the students to commemorate the birth anniversary of Mahatama Gandhi commonly called as ‘Bapu’.

The First Award received to mark the beginning of the journey as a Principal.Thanks to Almighty.

Swachhta Hi Seva Campaign 2019.
A campaign was organised in which the students participated whole -heatedly and cleaned the surrounding area near the school by picking up all the plastic waste .The litter was disposed of in a safe manner.

Let’s Go Wild (Jungle Party)
Animals are man’s best friends
Let’s Go Wild (Jungle Party) was organized by the kindergarten section of Cambridge International School, Nakodar on 17th September, 2019. All the classes of Kindergarten participated in this actively and enjoyed a lot. The students were dressed up as their favourite animals. They were thrilled by the sounds made by different animals.

Teacher's Day celebrated at Radisson Jalandhar with full zeal and enthusiasm. Thanks to our Management.

It is truly said “ A teacher can inspire , ignite the imagination and instill a love of learning “ . Keeping this in mind today Cambridge International School Nakodar celebrated teachers day in an indelible way . Students through different activities like dancing , speech , act followed by the effectual message given by our worthy principal-Mrs Sandhya Deewan amused everyone. A special event for the teachers named as “Cambridge Creative Teachers “ was organised in which teachers outshine their hidden talents like smokeless cooking , file decoration, pot making . Altogether it was a sparkling and a day well spent.

Janamashtami Celebrations ( Kindergarten)
"Tiny tots lent Janamashtami a special touch"
Janamashtami was celebrated with great pomp and festivity by the tiny tots of Kindergarten section of Cambridge International School, Nakodar on 22nd September, 2019. A beautiful backdrop was made and a cradle decked up with flowers and Bal Gopala was the centre of attraction.
The children danced to the beats of devotional songs of Krishna which filled the air with joy and festive spirit.A 'matki phod' event was also organised reflecting the mischievous nature of 'Bal Gopala'.

"Freedom in the mind, faith in the words, pride in our hearts, and memories in our soul, lets salute the nation on the Independence Day". C.I.S.N celebrated 73rd independence day by raising the flag in a ceremonial way. The spirit of freedom and nationalism was well exhibited by the students of C.I.S.N through a spectrum of patriotic slogan, speeches, dance and fancy dress competition. The celebrations concluded with inspiring words of honorable guest principal mrs. Sandhya Deewan followed by the National Anthem.

"Celebrating Teej is a symbol of a woman's love and sacrifice.This festival celebrates the bounty of nature, arrival of clouds and rain, greenery and birds, rituals and customs. Cambridge International school, Nakodar celebrated the teej festival on Wednesday. Staff members and honourable guests Mrs. R.R Angra chairperson, Mrs.Kirti Angra and Mrs. Sandhya Dewan Principal celebrated it with all enthusiasm. They shared their views on its importance and gave wishes to all staff members. All members were dressed in their ethnic attire and enjoyed this festival by giving their performances on cultural activities including teej folk songs. At last, it was a great festive atmosphere.

Judo team of CISN has added another feather in the cap by making consistent efforts and bringing laurels in Judo Championship on district level. Ekta of grade IV - A bagged silver medal and Arshdeep Kaur of Grade VIII- B won Bronze medal. School feels proud of their sparkling stars.

Cambridge International School Nakodar celebrated Kindergarten Convocation on 20th March, 2019. The Principal along with the Chief Guest felicitated the students with Certificate of Graduation. Children looked pretty in their graduation robes and caps. All the students are involved in the graduation celebration. They performed on various songs. Through Annual Report they tried to highlight all the activities done in the school through the academic year 2018-19. Bhangra was the main attraction of the show.

"May the Christmas sparkle with moments of love, laughter and goodwill. And may the year ahead be full of contentment and joy. " With the same feeling, Carol Singing Activity was done in C. I. S. N today in which all the houses participated and sang in harmony and joy followed by the speech on Christmas and New Year wishes by the Principal Mrs. Ravinder Mahal. 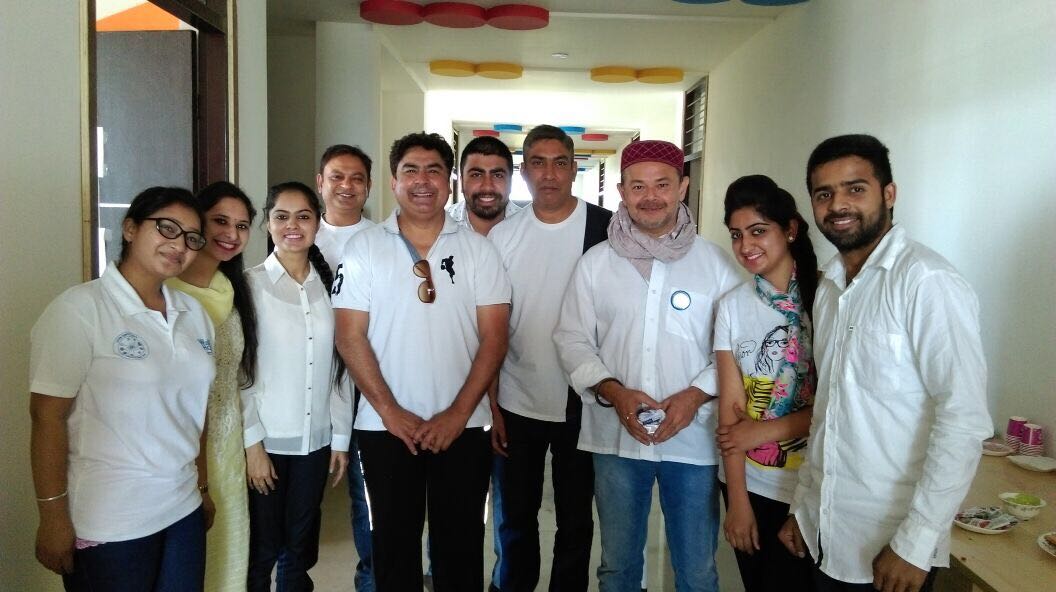